GRAVESITE OF DAVY CROCKETT’S WIDOW. On a 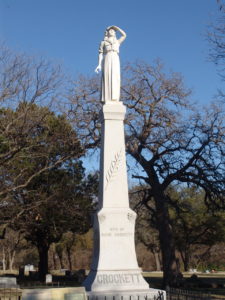 trip to Hood County I stopped by the Acton Cemetery and took a few photos of the gravesite of Davy Crockett’s widow, Elizabeth Crockett. Elizabeth was born in Buncomb County, North Carolina in May of 1788. She was Crockett’s second wife. They married in Lawrence County, Tennessee in 1815, after his first wife, Polly, died earlier that year. Two of Elizabeth and Davy’s children are also buried at Acton.

Elizabeth Crockett moved to the Acton/Granbury area in the mid-1850s to claim a land grant for the heirs of Alamo defenders. She died January 31, 1860, at the age 72.

According to historians, Elizabeth had gone for a walk that morning and fell dead not far from the log cabin (built by her son) that she’d called home for the last few years of her life. She was buried wearing “widow’s black,” the color she’d worn since learning of her husband’s death. Of course, everyone knows that her husband died in March of 1836, while defending the Alamo—a battle much on the mind of Texans this time of year.

In 1911, the state approved a towering monument (depicting a woman scanning the horizon in search of her husband) for Elizabeth’s grave. In 1949, control of the site was transferred to the State Parks Board, now the Parks and Wildlife Department. At only .01 acres, Elizabeth Crockett’s gravesite, also known as Acton State Historical Park, is officially the smallest state park in Texas. 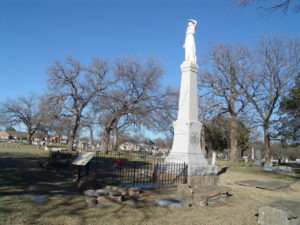 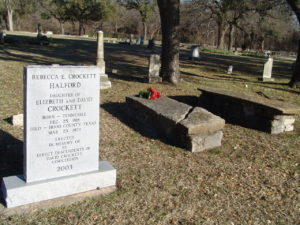 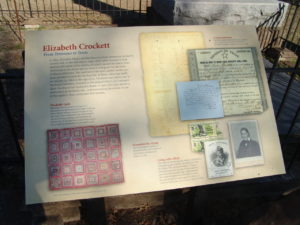