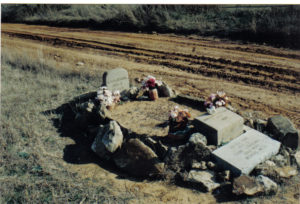 Little girl’s grave in Comanche County as it was in the late 1990s. Photo by Laura Conner Kestner

On a lonely stretch of road in north central Texas, a group of faded, tattered toys stand guard at the final resting place of a small child. Although the grave has occupied the space for more than 140 years, the toys are more recent additions. But it doesn’t take long for the Texas wind and sun to make things look old.

There’s no denying it’s a macabre sight on first approach. Known locally as The Penny Grave—(people often place coins on the markers) this burial site lies within a few feet of a rural Comanche County Road.

There are two markers at the site. One bears the words, “Little girl. Age 3. Name unknown. Died 1870. Moving west.” The other reads, “Who is this little girl?”

According to area historians, the little girl and her family were traveling west with a wagon train. The child supposedly fell off the back of the wagon and died from head injuries. Her grief-stricken family—miles from home—buried the child there before moving on. 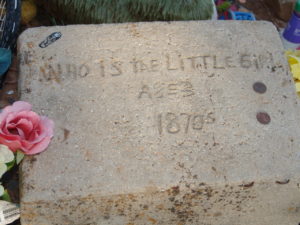 A cemetery was established at nearby Sipe Springs (pronounced Seep Springs) not long afterwards, but the grave was never relocated. No one knows for sure where her family eventually settled. The first headstone was damaged many years ago, but local residents have replaced it, several times. One elderly woman recalled her mother “tending” the grave for years. (As you can see from the photos, there’ve been three markers at times). 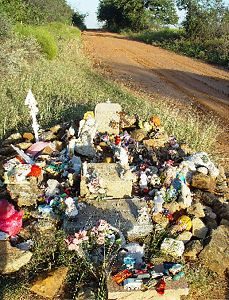 Among the things placed on the grave recently were stuffed animals, dolls, baby bottles, keys, angels, toy trucks and cars, notes, photos and Bibles. It doesn’t take long for the elements to mar the items, creating a somewhat garish, but still haunting image.

AUTHOR’S NOTE: I took all the pictures shown here, but they were taken years apart. As you can see, the road has been improved during that time, while the grave looks worse. The last time I visited, someone had left trash behind. I truly don’t understand that at all.

ABOUT SIPE SPRINGS. According to area historians, and the book “Patchwork of Memories,” the first school was built in 1873. Churches and a post office soon followed. The first postmaster was M.W. Hall, and several men took turns carrying the mail from Comanche once a week. Later, 10-year-old Nim Childress became the first official mail carrier, riding a mule named Jude.

At one point, a company of “Minute Men” was organized for protection from the Indians. One of the settlers, Bob Leslie, was killed during the last recorded Indian raid in 1874.

In the winter of 1918, an oil well, the Goss #1, came in and changed the little community. Sipe Springs became an oil boom town. For the next several years, life was good. There were two banks, a big school, an opera house, numerous stores and restaurants, and a professional baseball team. In fact, Sipe Springs grew so fast (the estimated population at one point was around 10,000) that it soon rivaled the county seat, Comanche.

That was many years ago. Nowadays, it more closely resembles the cactus and mesquite tree dotted landscape of the 1870s, than it does a bustling town. There are a handful of houses left, and a small but dedicated volunteer fire department.